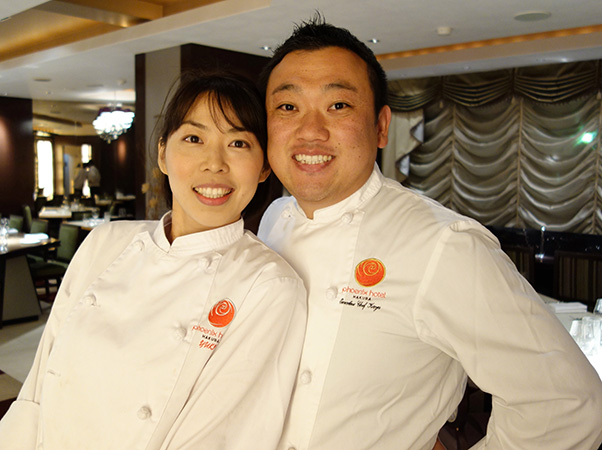 Being married and working together can pose some unique problems in a relationship but not so for the talented husband and wife team of the Phoenix Hotel Mimi’s Restaurant chef and patisseries chef Kazuyuki & Yuki Shimamoto.
The talented duo met seven years ago while both were working in Osaka’s Ponte Vecchio, one of Japan’s top rated Italian restaurants. Kazuyuki or Kaz as he is known, recalls when, on one of his first days in the kitchen, he saw a cute patisserie chef creating wonderful desserts and realized that he had found the love of his life, a girl as sweet as her creations.
Kaz, whose family are supermarket owners from Kobe, remembers from an early age his father would always bring home some new tasting food from work. It was this that hooked him up with being a chef. Studying geography during his university days, he would be more interested in the food of the different regions than the landscape. One such discovery was when he was learning about the Silk Road and the spices that were carried along the road, changing the food taste of two different continents.
After graduating, Kaz landed a job in the port city of Formia, on the Italian coast. Here he was able to learn the Italian style of cooking as well as working with a huge variety of seafood. Not knowing the language at first was a steep learning curve, but Kaz persevered and became renowned in the town as the Japanese chef who not only could speak the language, but could also serve up a dish even better than the locals.
Ask any elementary school girl in Japan what they would like to be when they grow up and one of the most popular answers will be a patisserie chef, but not many will strive to attain this ambition much less work in a top restaurant, yet Yuki has achieved this. From a young age, on her way home from school, Yuki would stare into the windows of the famous cake shops in Osaka wondering if one day her dream would come true. Kaz was very happy it did.
Whilst most people are drawn to Hakuba for their love of winter sports, Kaz & Yuki were inspired by the abundance of fresh ingredients that were literally on their doorstep. This was very unlike Osaka where every product had to be delivered daily. The couple opened their restaurant, Forte, deep in the heart of the Hakuba countryside. With no advertising and sometimes only one customer per day word quickly spread and it became a local favorite even though the drive took thirty minutes up a lonely country road.
The owners of the Phoenix Hotel soon got word of this amazing Italian themed restaurant and enticed the storied couple to come across and set up their kitchen in Mimi’s. But before this, Kaz & Yuki spent four months in Australia learning a little more about the difference in tastes between Japanese and western palates. Not only is size more important but so is engaging all the five senses while eating. At this time Yuki also perfected the art of pavlova, though she prefers to call it a meringue.
Shinshu is the old name for Nagano and the old name is still used in the food industry in Japan. With this in mind and being able to source so many local ingredients Kaz’s signature dish, which was very difficult for him to choose, is his Shinshu wild black pork loin. The black pork is from neighboring Omachi, and the meat is said to be the perfect combination of juiciness, flavor and tenderness. This is finished with celeriac gratin, apple jus and fennel.
Such is demand at Mimi’s in the Phoenix Hotel, probably the most gorgeous restaurant in Hakuba, that they now have two sittings, a family friendly one from 6:30 and a later one at 8:30. The room and hotel is very inviting for everyone and the food is reasonably priced considering the quality on offer. For those who have difficulty selecting from the comprehensive and delicious menu, Kaz and Yuki will put together a fabulous five course degustation menu carefully matching the food with wine and specially selected sake.
An evening at Mimi’s enjoying world class cuisine, wines and sakes should be an integral part of your holiday in Hakuba.
Tel: 0261-72-4060 Reservations Recommended
Hakuba Dining Guide Winter 2013-2014